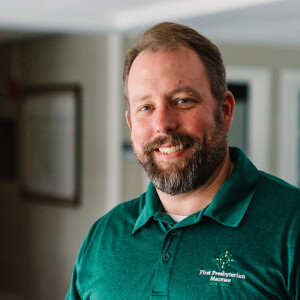 Jason joined the staff of First Pres Maumee in October 2007 and has been a church member since 1996. He holds a BA from BGSU. Jason is married to Marlo, and together they have three children, Bruin, Aubrey, and Ian. In 2016, Jason finished his Master's Degree in Theology from Lourdes University.

In his opinion, Batman is the awesomest superhero. He enjoys playing guitar, cheering on the Ohio State Buckeyes, driving the student van, and seeing lives transformed.